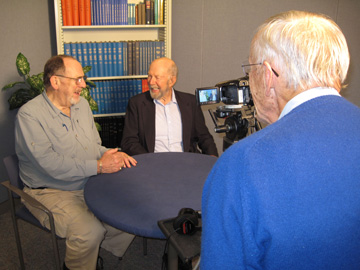 Since 1993, the UCDEA Video Records Project has been creating an oral history of the UC Davis campus by recording interviews of emeriti/ae as well as others who have made significant contributions to the development of the university. These interviews take the form of a recorded conversation between the interviewee and one of his/her friends and/or colleagues. More than 470 interviews have been recorded to date (Spring 2018). All new emeriti/ae are encouraged to arrange for an interview.

Interview videos are shown regularly on the Davis Community TV (DCTV) cable channel, and may be streamed from their website.

Beginning in 2017, the committee has worked to post the interviews to the AggieVideo website. Use the "Search" feature in the upper right corner to find a recent video by last name. The List of Video Records Interviews is updated quarterly.

Raymond Huffaker — We are saddened to note the passing of emeritus professor Raymond Huffaker. Dr. Huffaker joined the UC Davis faculty in 1960 and retired in 1994. He was one of the first plant physiologists hired at UC Davis. Dr. Huffaker played a seminal role in the early development, visibility, and international stature of campus’ programs in agronomy and range sciences. He also contributed to the establishment of the plant growth laboratory in the 1980s and 90s, which later became components of the current Department of Plant Sciences. His research contributions focused on nitrogen metabolism and photosynthesis. He was appreciated as an outstanding mentor. The Dr. Huffaker Graduate Student Research Award in Plant Sciences continues that legacy. He will be missed. Many of his perspectives are highlighted in his 2005 interview with his friend and colleague, professor emeritus R. W. Breidenbach from Agronomy & Range Science. https://video.ucdavis.edu/media/Ray+Huffaker/0_vfovfiro

Nicole Woolsey Biggart, Ph.D. — Professor emerita Biggart joined the Graduate School of Management in 1981. She served as the school’s dean from 2003 to 2009 and during this period held the Jerome J. and Elsie Suran Chair in Technology Management. In June 2010, she assumed the Chevron Chair in Energy Efficiency, which directs the UC Davis Energy Efficiency Center. In addition to campus administrative roles, Dr. Biggart has served in leadership roles for the Academy of Management, the Society for the Advancement of Socio-Economics, and the American Sociological Association. She has also served on the editorial boards of several professional journals, the Comstock’s Business magazine, and has been active in Sacramento business organizations, such as the Sacramento Area Regional Technology Alliance. Emerita professor Biggart is an expert in organizational theory and management of innovation. She has received numerous awards for her research. As examples, she is recognized as an AAAS Fellow, a recipient of the faculty pioneer award for sustainability in management education from the Aspen Institute, and the Sacramento Business Journal has honored her with their Women Who Mean Business Award. Dr. Biggart is interviewed by her friend and colleague Robert H. Smiley, Professor and Dean Emeritus, Graduate School of Management. https://video.ucdavis.edu/media/481+Biggart/0_znxg08h6

David Campbell, Ph.D. — Emeritus specialist Campbell came to UC Davis in 1990, first appointed as a lecturer in Political Science. In 2000, he moved to Cooperative Extension with an appointment as a specialist and director of the California Communities Program in the Department of Human Ecology along with other critical roles associated with the success of the UC Davis Sustainable Agriculture Research and Education Program. From 2014 to his retirement in 2019, he served as Associate Dean for Social and Human Sciences in the College of Agricultural and Environmental Sciences. In addition to his strong leadership, he has contributed to seminal research that focuses on the difficulty of developing public policy in complicated community settings. Dr. Campbell is interviewed by his friend and colleague Dennis Pendleton, Dean Emeritus of University Extension. https://video.ucdavis.edu/media/0_x76zesu4

Mike Chandler — Fire Chief emeritus, was hired in 1968 as a student firefighter. He advanced through the ranks to become Fire Chief in 1996 and served for eight years until his retirement in 2004. He then served as Chief of the Yocha Dehe Fire Department from 2004 to 2012. Among his many activities are service as president of the Woodland Rotary Club and chair of the Woodland Memorial Hospital Board of Directors. He also served as Yolo County's operational area fire and rescue coordinator. Chief emeritus Chandler currently is the president of the UC Davis Retiree's Association. Many of his accomplishments and perspectives are highlighted in the interview with his friend and colleague, UC Davis Police Chief emeritus Calvin Handy.https://video.ucdavis.edu/media/t/0_wxe6go7q

Rebecca Davis — Emerita Librarian Davis joined the UC Davis Library system in 1986 as the Coordinator of Online Search Services at the Carlson Health Sciences Library. During her tenure as a health sciences librarian, she served as head of reference services at the Carlson Health Sciences Library and as coordinator of outreach services for the Health Sciences Libraries. During the latter part of her career at UC Davis, she served as assistant head of the Health Sciences Libraries and operational head of the Blaisdell Medical Library in Sacramento. She retired in 2014. Emerita Librarian Davis came to UC Davis with an extensive background, which is summarized in a recent interview with the Northern California and Nevada Medical Library Group, a chapter of the Medical Library Association (https://ncnmlg.mlanet.org/main/?p=587). For her record, she is interviewed by her former supervisor, colleague, and friend, Jo Anne Boorkman, Emerita Librarian. https://video.ucdavis.edu/media/492+Rebecca+Davis/0_px45kp06/25824152

Karl Levitt, Ph.D. — Professor emeritus Levitt was appointed to the Department of Computer Science in 1986. He retired in 2018. Professor emeritus Levitt conducts research and teaches in areas relevant to computer security, automated verification, and related software engineering. He has an international reputation in these areas. For example, while at UC Davis, he spent four years at the National Science Foundation as director for the NSF's computer security program and has advised other U.S. Government agencies on technical and policy issues related to cybersecurity. Dr. Levitt is also the co-principal investigator on the NSF project, "Evaluation Methods in Internet Security Technology," which supports work at UC Davis, as well as UC Berkley, Purdue, and Pennsylvania State Universities in collaboration with the U.S. Department of Homeland Security. In 2014, Dr. Levitt received the 2014 Jean-Claude LaPrie Award in Dependable Computing from the International Federation for Information Processing Working Group. The award recognizes outstanding work that has significantly influenced the theory and/or practice of dependable computing. He is interviewed by his long-standing colleague and friend, Matt Bishop, professor of Computer Science. https://video.ucdavis.edu/media/0_sisakdly

As part of the commemoration of UC Davis’ centennial in 2010, Professor Emeritus Verne Mendel compiled many of the Video Records Project interviews — organized by college, school, or department — to create 23 DVD’s. He was awarded the Edward A. Dickson Emeriti Professorship Award in 2008 for this project. Centennial DVDs may be viewed in the Special Collections section of Shields Library.

The Video History Project is comprised solely of volunteers. Opportunities abound and training can be provided.

Following academic service at the University of Alberta, he returned to Davis in 1963, working first at the Imperial Valley Desert Research Center and then the Davis campus. In 1973, Dr. Mendel moved a part of his appointment from the Animal Science Department to Animal Physiology. He served as department chair in Animal Physiology from 1973 to 1978, and again, from 1987 to his retirement in 1991.

His research focus was in areas relevant to food intake regulation; specifically, the identification of endocrine and environmental factors that aid in governing food intake. Professor Emeritus Mendel also had a strong commitment to the importance of collaboration. As an example, he was central to the development of a campus-wide food intake research laboratory, one of the first in the country.

Likewise, for the UC Davis Emeriti Association (UCDEA), he played a central role in the development of one of its most important programs. Working with Alan A. Stambusky, professor emeritus of Theatre and Dance, they organized what eventually evolved into the current the Video Records Project. Importantly, many of their original videotapes record accounts of UC Davis events going back to the 1950s and for some individual interviews, even further.

At the community level, Verne was one of Yolo Hospice’s first board presidents, and along with his wife, Katinka (Tink), again played central roles in its growth and development.

We encourage you to read the Yolo Hospice’s feature of Verne on his 95th birthday, in the Davis Enterprise . It captures the wit and charm that many of us remember as we reflect on Professor Emeritus Verne Mendel. (https://www.davisenterprise.com/features/yolo-hospice-well-worn-wisdom-from-a-95-year-old). The public obituary can be found at https://www.davisenterprise.com/obits/verne-edward-mendel. A service at University Retirement Community awaits lifting of COVID-19 restrictions. In lieu of flowers, the family asks that you donate to Yolo Hospice. We also invite you to watch his UCDEA video records interview with Professor James H. Meyer (Animal Sciences), chancellor emeritus. (https://video.ucdavis.edu/media/Verne+Mendel/1_drl0ka5g/258234220)