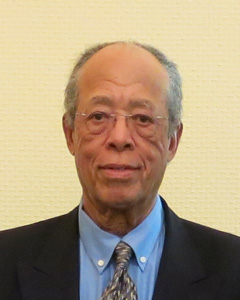 Professor Emeritus William Jackson continues to mentor graduate students and is the Priniciple Investigator (PI) for the Alfred P. Sloan Foundation's Minority Ph.D. Program that supports underrepresented graduate students in Chemistry and the PI on a current NSF-grant that has just be renewed for three years. Professor Jackson continues to play an important role both local and nationally in terms of improving diversity. He was one of the founders of National Organization for Black Chemist and Chemical Engineers (NOBCChE). This organization is still going on and has awarded over a million dollars of graduate Fellowships and Scholarships. He served on the first Committee on Equal Opportunity in Science and Engineering (CEOSE), which was a Congressional-mandated committee to advise the Director of NSF on these issues and provide a report to congress on them.

Professor Jackson's research has focused on fundamental photochemistry and kinetic processes. He has developed novel methods for photodissociation of small, polyatomic neutral molecules. Since his retirement he has developed with his collaborators an apparatus that employs two tunable VUV lasers coupled to a slice imaging apparatus for characterization of the atomic products. This is the only instrument of its kind in the world and it has opened up the possibility of studying the simple molecules such as N2, CO, CO2, and NO in the deep VUV spectral region. This spectral region is critical to our understanding of the chemical processes that are occurring in the Earth's thermosphere. It is in this region where the photodissociation of CO2 occurs with a high probability and will ultimately limit its rise in our atmosphere. His work has shown that the Wigner-Witmer selection rules can be broken at these high energies. Further, he has been able to demonstrate that CO2 can be used as the simplest example of what happens in the photodissociation polyatomic molecule. This in turn is bound to increase the theoretical understanding of much more complex molecules by allowing theorist to test ideas about the conversion of electronic to vibrational energy in an isolated molecule as well as how facile it is to flip spins in the outer electrons.

His research is internationally renowned and has received many awards recognition including the AAAS Fellow, APS Fellow, ACS Fellow, Giant's in Science Award, Senior Humboldt Research Award, Guggenheim Award, and Sigma Xi Distinguished Lecturer. He has 187 publications in peer-reviewed journals, 25 of which were published since his retirement. The relevance of his research is reflected by the fact that one of these (Paper #14) was one of the 20 most downloaded articles from J. Chem. Phys. in August, 2011. Another of his papers appeared in Science (Paper 24) that showed for the first time that molecular O2 could be produced in the VUV photodissociation of CO2. Thus, you do not have to biological activity to CO2 to O2 in the early history of earth and other planets. His research has been funded for many years by the National Science Foundation, National Aeronautics and Space Administration and the Department of Energy and is currently being funded by NSF (does not expire till August 2016). He has recently initiated International collaborations in Germany and in Paris. In the former he was supported on and extension of his Senior Humboldt Award to spend one month at the Technical University of Munich collaborating with a young theorist, Dr. Sergy Grebenshchikov, to understand to extend his theory to some of the experimental results obtained in Professor Jackson's laboratory. As a result of this visit Professor Jackson looked for and successfully identified a new channel in the photodissociation of CO2, namely the molecular production of O2 along with the formation of ground state C atoms. Further, evidence of the importance of Professor Jackson research is his award visiting Professor at the University of Paris-Est Créteil. He was one of the eleven awardees for the year of 2013.

Since his retirement in 2006 he has worked to increase the minority enrollment in our graduate program from 5% to 16%. He has spent a considerable amount of time not only recruited the students but also mentoring them once they are enrolled in the graduate program. As result the retention rate of those students has been much higher than the retention rate of the departmental graduate students. None of the students that he mentored worked with him in his research so that this is in addition to the five graduate students and seven Post-docs that he worked with in his own research.

Professor Jackson continues to serve the department and the University in committee work. He promotes chemistry and represents the department both to the University and at a national level. He also advises the chair on issues related to Physical Chemistry and other issues such as diversity. He is an exceptional PI and mentor for students in the Sloan program that exists in chemistry. He has donated his research equipment to one of our faculty members, Cheuk Ng, and provides some funding for Professor Ng’s graduate students. Additionally, while Professor Ng has been on leave, Professor Jackson is the primary mentor for these students.

Professor Jackson’s past and ongoing work exemplifies his passion for science and commitment to service. In my opinion, there is no one more deserving of this award. UCD has been very fortunate to have him as one of ours. Professor Jackson exemplifies the best of our emeritus faculty. His continued commitment to the Department and the University is exemplary and is a model for all us.