The 2016 Constantine Panunzio Distinguished Emeriti Award honoring emeriti professors in the University of California system has been awarded to Professor Emeritus of Asian American Studies, Isao Fujimoto of UC Davis and Professor Emeritus of History, Peter Kenez, UC Santa Cruz. Professors Emeriti Fujimoto and Kenez are the thirty-sixth and thirty-seventh UC Emeriti Professors to receive the Constantine Panunzio Award. Both awardees had especially long and notable records of research, teaching and service to the University of California, their disciplines and their communities. The late Dr. Panunzio, a professor of sociology at UCLA for many years, has been described as the architect of the UC retirement system and was particularly active in improving pensions and stipends for his fellow emeriti. The award bearing his name was established in 1983 and includes a $5,000 prize. 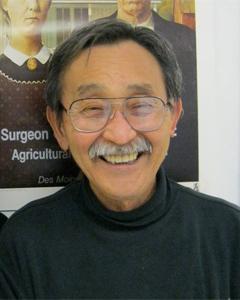 Dr. Fujimoto’s biography is legendary. As the eldest of 13 siblings in a family that farmed strawberries near Morgan Hill, Isao Fujimoto grew up on an Indian reservation in Wapato, Washington and was an inmate of the Heart Mountain, WY and Tulelake, CA internment camps during World War II. Dr. Fujimoto received his undergraduate degree in Biological Sciences at UC Berkeley in 1955 and went on to obtain a Master’s in Education from Stanford in 1960 and a Ph.D. in Development Sociology from Cornell University in 2010.

Dr. Fujimoto joined UC Davis in 1967 as a founding member of the Community Development program. After a distinguished career at UC Davis in the Community Development Department, and as founder of the Asian American Studies program, among others, his work has gone on unabated since retirement in 1994. Among many other achievements, three long-term endeavors stand out: 1) his Summer Abroad course in Kyoto, Japan, 2) his partnership with the Rural Development Leadership Network, and 3) his facilitation of the Central Valley Partnership for Citizenship. For these efforts he has achieved national and international renown and many honors. In each of these efforts his focus is on rural development and the betterment of the worker’s education, standard of living and vocational tools. As a Davis community member, and with the help of his students, he helped to incubate such cherished local staples such as the Davis Food Co-op and the Farmers’ Market, both which were originally run from his home. Since retiring Dr. Fujimoto has served as primary instructor for a remarkable 50 courses in the past 20 years.