UC Davis announces the 2017 recipients of the Edward A. Dickson Emeriti Professorship Award 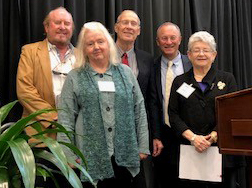 ﻿Peter Hays is an emeritus professor of English. He has served as a past Chair of English and has a long history of distinguished UC Davis Academic Senate service. Dr. Hays is a twentieth-century American literature scholar, with interests in high modernism and drama. During his career, he has written four books on Hemingway and one on Arthur Miller and published over 100 essays, articles, and notes that focus on 20th-Century American literature.

Dr. Hay's funding will subsidize illustrations for a new book, Reading: The Old Man and the Sea. It will be the fourth book in the "Reading Hemingway" series by Kent State University. The unique features of this book are its illustrations, which are designed to clarify the numerous interconnecting elements in The Old Man and the Sea and the thoughtful approaches Hemingway took in planning the book.

Dr. Marci will investigate the origins and cultural evolution of human communication systems by comparing two early scripts from Mexico and Central America. The Maya Hieroglyphic Database, which details Maya texts, will be used to identify developments in the origin of writing in ancient Mesoamerica by comparing Maya and Isthmian scripts. A goal of Dr. Macri’s is to assess whether one script is derived from the other or both scripts developed from a common ancestor.

﻿Frederic Troy, II, is professor emeritus and former Chair of Biochemistry & Molecular Medicine in the School of Medicine, and a founding member of the UC Davis NIH Comprehensive Cancer Center and UC San Diego Glycobiology Training Facility. He is a recipient of numerous awards and is a past President of the Society for Glycobiology.

Dr. Troy's current work focuses mostly on the occurrence, structure, function, and synthesis of sialoglycans. Sialoglycans are carbohydrate-based polymers containing sialic acids, novel nine-carbon-backbone sugars. Sialoglycans have a variety of biological, biophysical and immunological functions. For example, they play roles in modulating cell-cell interactions, principally during embryonic development, neural plasticity, and tumor metastasis. Dr. Troy has recently developed experimental procedures to determine the chain length and degree of polymerization of polysialic acid glycan chains. For his work, a tumor-associated cell surface sugar antigen (α2,8-linked polySia glycan) will be investigated. An unusual feature of this polysialic acid glycan is that it is polydispersed and can vary in size. An important, yet unresolved, question is whether such polydispersity, differences in the degree of polymerization, or size is important to specific biological functions or plays a role in tumorigenesis.

The UC Davis Emeriti Association congratulates Drs. Peter Hays, Martha J. Macri, and Frederic Troy, II for their past service and innovative projects. They are deserving recipients of the 2017 Edward A. Dickson Emeriti Professorship Awards.